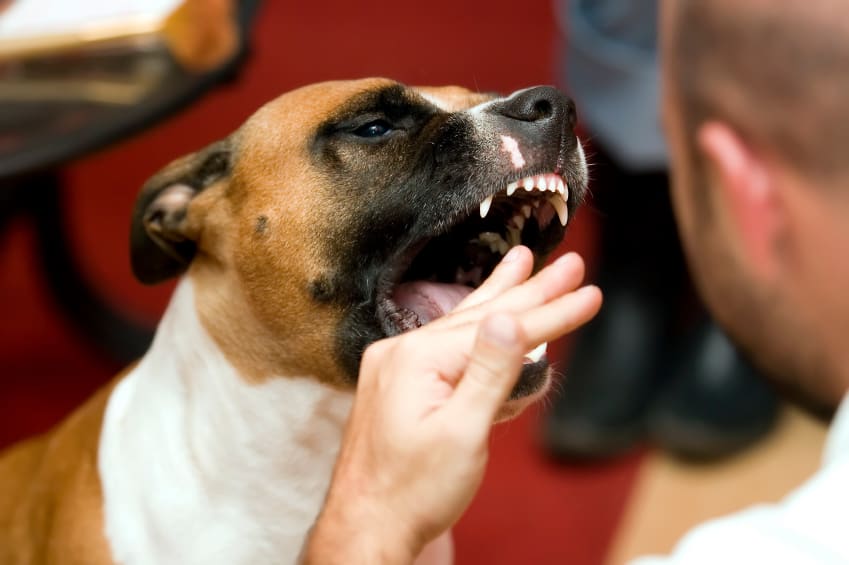 Roughly four and a half million people are bitten by dogs in the US every year. This number sounds astronomical, but when you consider that there are almost 75 million dogs live in the United States, the statistics show that only a small portion of dogs are guilty of biting.  Dogs that bite can be a serious problem, as half of those treated for bite injuries are children.  Dog bites have a variety of causes and in order to prevent or eliminate dog bites, the behavioral problems that result in the bites must be properly diagnosed and treated. Possessive aggression can cause dog bites.  Possessive aggression or “Resource Guarding” is seen in dogs that will bite or demonstrate aggression to protect something that they deem to be a resource.  The aspect of resource guarding that is most confusing to dog owners is that the dog determines what the resource is.  For example, the dog can deem food, toys, people or even personal space to be a resource and they will guard it at all cost, even if this results in a dog bite.  to treat resource guarding, we must safely begin to control those things that the dog deems to be a resource and teach them that aggression and biting will not allow them to gain or maintain resources. How to prevent dog biting

Preventing and controlling dog bites is fairly simple and a straight forward process.  In order to prevent bites and aggression, you need to create a well balanced dog.  Creating a well balanced dog is a simple process but one that will require some time and effort.  The four key components to creating a balanced dog are socialization, training, communication and exercise. Socialization is a critical component of building a well balanced dog.  Socialization is likely the most important key in preventing dog bites.  Dogs should be socialized to people, children, animals, vehicles and new environments, just to name a few.  No dog is too old for proper socialization to have a positive impact on their temperament and behavior.  Take every opportunity to socialize your dog, but be sure not to overdo it and never force situations on a dog that isn’t comfortable.

Training is also important for those wanting a well balanced dog.  Regular training provides your dog with much needed mental stimulation while helping to build a strong bond.

Communication with your dog will make your behavioral expectations clear and eliminate any confusion with your dog.  If you convey your behavioral wishes and expectations clearly, your dog will know exactly what to expect.  Dogs communicate with humans as if we were also dog.  They “speak” to us with non verbal signals and cues that are very clear if we learn to understand their meanings.  Understanding canine body language and these non-verbal signals will go along way in controlling and preventing behavioral problems.

Exercise on a regular basis will get rid of unwanted or excess energy that can lead to inappropriate behaviors, including aggression and biting.  Walking, jogging, biking or just playing ball can be great ways to exercise your dog.  Playing with your dog is also a great way to learn and combine both training and exercise.

At Highland Canine Training, LLC, we specialize in dog aggression and biting behaviors. If you need help or advice in treating dog behavior problems with one of your existing pets, please feel free to call us at 866.200.2207 or email us at training@highlandcanine.com.  We offer free in-home evaluations and offer affordable and effective solutions to all dog behavior problems.  This article is the second in a series of information on Treating Dog Behavior Problems. Be sure to follow the links below to learn more about the topics in this series.

Our in-kennel, Gus, has kicked off his modeling ca

Well of course you can speak to the manager .... #

You can't start Wednesday until we play 🐾⚽️

Shout out to students and trainers working with th

Dewey had to get in on the #dollypartonchallange..

Do you believe in love at first sight? Peppa Pig

Ghost.. working on the place command 🐾🐾🐾